Dysmenorrhea is described as the pain or the discomfort in the lower abdomen that occurs before or during menstruation. The pain usually disappears after the first two days of menstruation and ranges from mild to severe. In severe cases of dysmenorrhea, it can disrupt daily activities.

Dysmenorrhea, which affects half of all the women, is also called menstrual pain. Menstrual pain should not be consumed with menstrual cramps, or the contraction of the uterus, which is the longer and more intense. Nor should menstrual pain be confused with premenstrual syndrome (PMS), which is characterized by mood swings, tenderness of the breast, and caused by the change in hormonal levels of the body.

As previously described, dysmenorrhea is pain or discomfort in the lower abdomen. The pain is often described as dull, sharp, burning, shooting or throbbing. The other symptoms associated with dysmenorrhea include:

The main purpose of applying first aid for dysmenorrhea is to alleviate pain and discomfort. The following steps may be done to fulfill these goals: 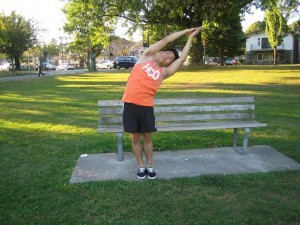 Although dysmenorrhea is not serious, it is still important to administer first aid to ease pain. To learn how to alleviate pain of dysmenorrhea and other sorts of pain, enroll in First Aid Courses.

Dysmenorrhea pertains to the pain in the lower abdomen that occurs before or during a menstruation. Dysmenorrhea is also called menstrual pain.

View all posts by Mikha Canon →